I started watching Eurovision in 2007.  No idea why.

Possibly the fact that I am Australian had something to do with it. All we got for years was send-ups of Benny Hill doing Eurovision. This may offend some greatly but oh-my-goodness he got it right: 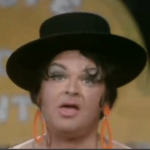 In a world of La, La, La; Diggi-Loo Diggi-Ley and Ding-a-Dong, Fred Scuttle’s Ting A Ling A Loo is positively award-winning material. (He’s the one with the glasses). But back to Eurovision 2007. All I know is that when I saw Verka Serduchka Dancing Lasha Tumbai, life would never be the same again…

Here we have Verka Serduchka NOT Dancing Lasha Tumbai. Being rather stationary, if anything. She’s working the crowd at the Eurovision 2007 Press Conference with trusty translator by her side.

For Christmas 2014, I received a little black bag not unlike a medical kit. Inside were 48 discs. Every Eurovision final from 1956 to 2004. This could possibly be the perfect present. Enough Eurovision to last almost a lifetime.

And so my quest began: to listen and learn.  Mark, read and inwardly digest. Become a Euro-vision-exper-tis-ta. Across the decades. Every single excruciating year. Not a small task. But I was up to it.

Tingling with excitement, I reached for 2002. 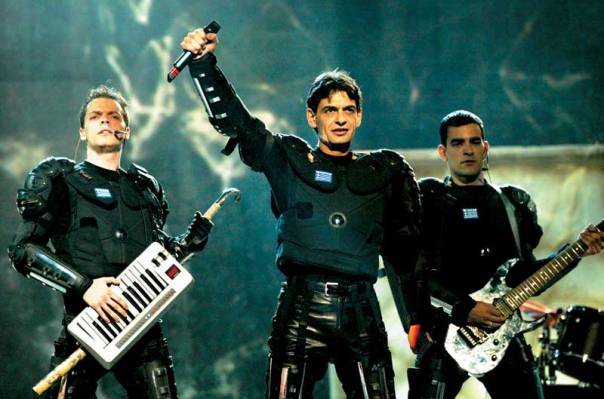 Because that is the year of the insanely fabulous S.A.G.A.P.O. Look at those boys. Really look at them. They epitomise everything Eurovision. And I love ’em to pieces.

So say (say, say) say the password and enter a new world, the inexplicable, upside down, insane, unfair, exasperating, crazy, impossibly fabulous world of the thing that is the Eurovision Song Contest.